The University of Waterloo Stratford Campus is a digital media school with a strong focus on user experience. I developed a plan for showcasing: student work, upcoming events, and to engaging users as they entered the campus.

The lobby has a 55″ television that is running a web application controlled from a server room in another part of the building. This is achieved through the use of transmit/receivers for both video and audio. The web application is a loop that refreshes the entire application to clear caches and reset API limits. Each section of the application has dynamic content that updates every thirty seconds to ensure users can see their interactions with the TV before leaving the lobby. 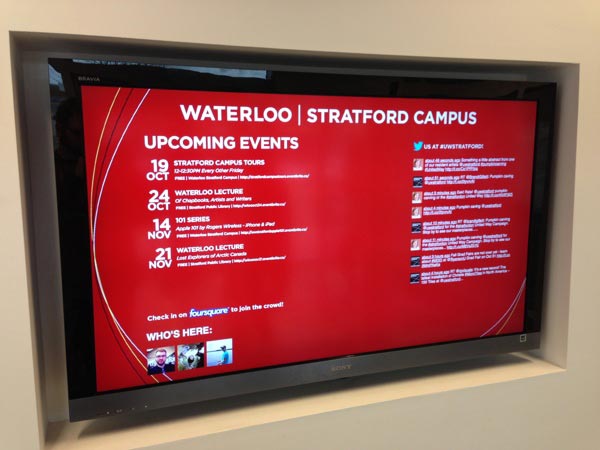 This screen showcases the upcoming events at the campus as well as an interactive twitter feed and foursquare check-in list. Users can tweet a message using any of the Waterloo Stratford Campuses hashtags or the main #uwstratford tag and have it appear on the TV. When a user checks-in on foursquare publically their avatar pops-up for all patrons to see. 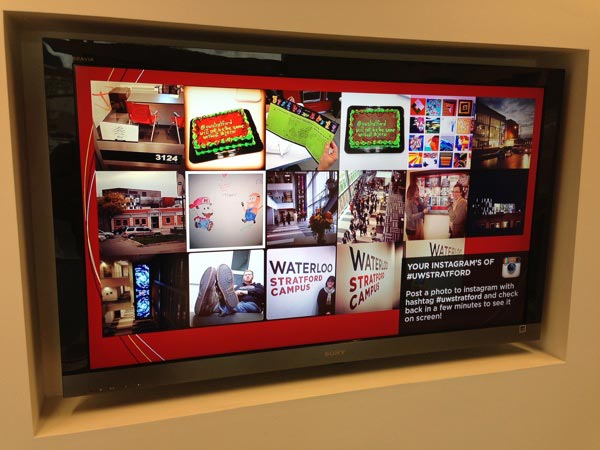 The TV application also features an Instagram wall to increase visual content generation for the campus. This works in the same way as the twitter feed, a user posts a photo with the hashtag #uwstratford and their image appears on the wall with-in. The application also has a fullscreen video in the loop. Each screen of the app can have it’s own duration set in the javascript code.

This application was written in PHP, HTML, CSS, jQuery, and JavaScript using the Instagram API, Twitter API, and Foursquare API.